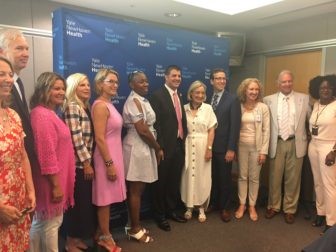 Gathered to celebrate the passage of the bill Wednesday were a group of lawmakers, advocates, and medical professionals. Included in the group, starting fifth from the left, were House Minority Leader Themis Klarides, R-Derby; Rep. Robyn Porter, D-New Haven; Rep. Turco; Jan Kritzman; and Sen. Lesser.

Harrowing tales from breast cancer survivors from across the state and a slip-up from a freshman legislator are among the circumstances that led to the passage of a bill expanding health care coverage for annual breast cancer screenings.

There are approximately 3,500 newly diagnosed cases of breast cancer in Connecticut each year, according to the Connecticut Breast Health Initiative, and the scourge of the disease was apparent in the stories told at Yale New Haven Children’s Hospital Wednesday as officials, advocates, and health care experts lauded the passage of legislation they say will save lives.

“There is no vaccine, there really is no prevention and breast cancer is not a choice. It’s a shot from Mars that could kill you and your only weapon is early detection,” said Jan Kritzman, a survivor and advocate for Are You Dense, who said early detection saved her life. “That weapon will now be available to the women of Connecticut.”

The ultimate passage of the bill — at least in its full form — was somewhat of a fluke, however.

This past legislative session, Sen. Matt Lesser, D-Middletown, was meeting in his office with a few members of the Insurance and Real Estate Committee and some advocates, discussing whether they should amend the scope of the bill to bring down its cost, when their meeting was interrupted by a call that the House of Representatives was voting.

Freshman lawmaker Rep. Gary Turco, D-Newington, rushed to open the door of Lesser’s office, but in his inexperience with the door’s security mechanism, Turco accidentally locked everyone inside.

““People were sweating to get out of there and sometimes that focuses the mind. It’s an unorthodox strategy, but it worked,” Lesser said. “I was worried that we wouldn’t be able to pass the bill as written because it was a strong pro-consumer bill and I was wondering if we needed to limit [its] scope in order to pass it. In that meeting I was convinced to go forward with the bill as it is and not whittle it down.”

Connecticut led the way in early breast cancer detection with legislation in 2009 which recommended additional ultrasound screenings for patients who had dense breast tissue—the presence of which increases the chances of breast cancer and masks abnormalities, inhibiting early cancer detection— but the bill stopped there.

Gov. Ned Lamont picked up the baton and included in this year’s state budget is a mandate that will increase access to preventative care by lowering out-of-pocket costs for breast ultrasound screenings.

“Nancy was the catalyst, we did this together,” Joe Cappello said of his late wife Dr. Nancy Cappello, who created the Are You Dense Foundation—an advocacy group that educates women about the challenges dense breast tissue poses to early detection and its impact on missed, delayed and advanced-stage breast cancer.

“She was the person diagnosed with Stage 3 breast cancer, because of her dense breast tissue her cancer was missed, and we couldn’t understand how a large tumor could be missed after 11 years of normal mammograms,” Cappello said. Nancy passed away in November of 2018, and her advocacy work led to density inform laws in 35 states.

Current law already requires insurance policies to cover breast ultrasounds for women with dense breast tissue, family or personal history of breast cancer, positive genetic testing, or other high-risk indicators, however, many women forgo the screening because of the additional up-front costs. Ultrasound costs are not covered until patients have met their deductibles, officials said.

“It’s because [ultrasounds] are not covered the same way mammograms are and that was appalling to me,” said Rep. Dorinda Boer, D-West Haven, one of the bill’s lead proponents. “We talk a lot about health equity and disparities in health care, the difference between the haves and have nots, and this legislation is a concrete, tangible example of how we’re going to bridge that difference.”

The legislation will have a modest impact on the state employee and retiree health plan, with an estimated cost of $15,000 annually, according to the non-partisan Office of Legislative Research. The bulk of the cost will rest on the shoulders of private sector insurance providers.

“If you’re wealthy, you have coverage and you can go and get the breast ultrasound you need to detect early-stage cancer in women with dense breasts. But if you’re poor, if you don’t have that stellar coverage, you’re just not able to get that care,” Lesser said. “With this legislation that ends for women.”