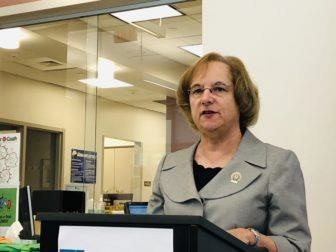 Connecticut health officials who gathered in Bridgeport Wednesday to declare their support for vaccines said they are increasingly concerned about the state’s religious exemption, with some calling for lawmakers to erase the provision next year.

“The top resolution that came out of our annual leadership meeting this year was to advocate for removal of non medical exemptions at the state level,” said Dr. Jody Terranova, a pediatrician and board member of the American Academy of Pediatrics’ Connecticut chapter. “The national AAP is working with each state chapter so they can advocate that their legislatures remove non-medical exemptions.”

While the Connecticut State Medical Society has not taken a formal position on whether lawmakers should repeal the religious exemption, its president called for more public education on the benefits of immunization.

“The Connecticut State Medical Society remains concerned about the increase in vaccine exemptions and the basis on which these decisions are made when the science is irrefutable,” Dr. Claudia Gruss, the group’s president, said. “We need to continually look at policies allowing exemptions and the reasons for such requests. The public good and the public health must be protected.”

The medical officials took part Wednesday in a roundtable discussion on vaccines at the Southwest Community Health Center, a federally qualified health center in Bridgeport. The discussion was closed to the public, but participants addressed patients and the media after its conclusion. The event was part of National Immunization Awareness Month. Av Harris, a spokesman for the state’s Department of Public Health, refused to offer an opinion on whether politicians should wipe out the religious exemption to vaccines.

Democratic legislative leaders have made multiple appeals to Health Commissioner Renee Coleman-Mitchell for her input. So far, she has brushed aside their requests. Coleman-Mitchell did not attend Wednesday’s gathering. Although Harris said at the meeting that the matter is outside the agency’s purview, he later said the commissioner still intends to issue a response of her own to lawmakers. It was unclear whether the commissioner’s official response to lawmakers would be different than the opinion expressed by Harris on Wednesday.

“What you’re asking about is a question … of society and law and religion, which is not in the jurisdiction of the Department of Public Health,” Harris said, referring to queries about the agency’s stance on the religious exemption. “This is really kind of a philosophical, societal question.”

“We want to be careful,” he said. “We’re public health people; we are not religion and society people. I know there are people in the legislature who are trying to push the commissioner to tell them what to do. The governor has said clearly: ‘If the legislature puts a bill on my desk repealing the religious exemption, I will sign it.’ So I think the ball is in the court of the legislators.”

In June, Democratic leaders in the House and Senate sent a letter to Coleman-Mitchell asking whether they should move forward with abolishing the religious exemption. The commissioner told them she would review their request and respond at a later time.

Claudia Gruss, president of the Connecticut State Medical Society, said she is concerned about the increase in the number of people claiming the religious exemption to vaccines.

Five Republican lawmakers also sent a letter, dated July 30, urging her to do the opposite and remain silent on the
matter.

A review of efforts in New York, Washington and Maine – all of which succeeded in repealing religious or philosophical provisions this year – show those states had the backing of their public health officials. Connecticut lawmakers have said they are looking for similar support.

The health department in May made public for the first time its school-by-school assessment of child immunization rates. The data from 2017-18 showed 102 schools where fewer than 95 percent of kindergarten students were vaccinated against measles, mumps and rubella – the threshold recommended by the Centers for Disease Control and Prevention.

That touched off a flood of outraged remarks from state leaders, who by then had recorded three measles cases in
Connecticut.

Health officials, who had planned on releasing the 2018-19 school year vaccination data, now say the issue is on hold. A Bristol couple is suing the state to block the distribution of those figures.

“I think we’re a victim of our own success in a lot of ways,” said Michael Bolduc, the vaccine coordinator for the public health department. “We’ve been very successful in immunizing a lot of kids, but we’ve seen with the release of the data that our numbers have gone down and it is concerning. We’ve seen the rates for the religious exemption go up, so we are concerned.”

Stacy Taylor, legislative coordinator for the Connecticut Academy of Family Physicians, urged community leaders Wednesday to get involved in sharing facts about vaccines. The CAFP has also called for the removal of the state’s religious exemption.

“There has to be a balance between protecting the public health and doing what the individual wants,” she said. “How that balance is achieved is a work in progress.”

This story first appeared August 7, 2019, in The CT Mirror | by Jenna Carlesso